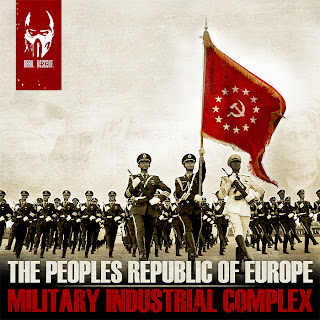 Whats that? A new design? And what's that Dark Descent doing there? Well, it's simple. Dark Descent is a Dutch label concentrating on mid paced industrial hardcore, doomcore and hard techno. I like this label very much, because the stuff they release is so fucking good, you will throw everything Pronoize releases in the dustbin when you hear what these guys do. We have been in contact with them and since the people behind this label also do radio and podcasts in which they played our stuff regularly. So i asked them if they wanted to do a TPROE release. Well, that pic says it all!

For us this is a big opportunity because it allows us to presents ourselves to a completely new scene. A scene where people wear dark hoodies, love hard music for the harshness and are real representatives of the industrial scene instead of what has become of the "goth" side of industrial because of retardation like Ext!ze, Eisenfunk and Valium Era.

The new design (which i absolutely love) is made by The Relic. He will also master the new album, which will be released probably around June.
In the mean time: check out our new label. If you like TPROE and similar music, you are gonna cream your pants again...and again....and again! http://www.darkdescent.nl/
Made by TPROE at 7:02 PM

TPROE
The netherlands premier rhytmnic noise band. Started out in 2000. Already released a ton of albums and EP's though their own label New Darkness recordings and on US based Vendetta Music. On this blog we will post about stuff we like, stuff we don't like, stuff which keeps us busy and cats.