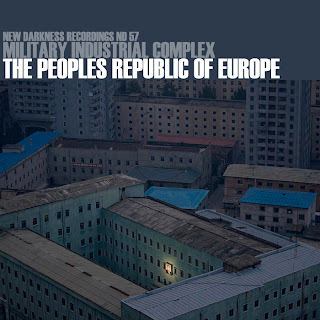 Lets talk about the upcoming new TPROE album. It is already more or less finished, since i had some creativity spree which also spawned the "Reign of Terror" EP. Originally i was planning on releasing EP's and singles in the future, but i made enough stuff to be on an album. So a new album it is!


"Military Industrial Complex" is more experimental then the work of the last 5 years. The current state of the music world (which can be described as "scorched earth") is such, that i don't feel any obligation anymore to please people, and i only make stuff which i myself like to make. This album has ten tracks which do just that. A rundown!
1- The holographic principle
This is an IDM song. The percussion is more noisy, so it is somewhere between TPROE and my IDM project Higgs Foton/Kratarknathrak. It even has piano!
2- Black Sky
Very technoish song. Also a lot longer and very atmospheric. It's hard and brutal but much more sophisticated and layered. Comparable to Ant-zen acts, but more funk.
3- The general and the mountain
A darkambient song about Kim Jong Il. We already did the Juche album in 2004, but after the great leader sadly left this earth and even nature mourned his death i decided to revisit the DPRK theme for this one.
4- Moloch
A very heavy technoish tune about social structures to big to control. Over the heavy thumbing there are lots of shoegaze influenced soundscapes, so this one is also very noisy in a My Bloody Valentine way.
5-The approach
A breakbeat song like stuff Mono no Aware puts out for instance. We have always been a big fan of Leif his output, so we also make stuff like this.
6- Maximum Control Zone
In the DPRK the enemies of the state are held in what they call "Maximum control zone's". These are the harshest of gulags. Currently the world is slowly moving into dictatorship now the capitalist system is falling apart. This one is not about the DPRK's gulags, but about the gulags of the future where companies and governments will keep those who refuse to consume or be debt-slaves. Song is also very heavy techno with fuzzy melody lines and lots of screaming.
7- Hell part one
8- Hell part two
Long darkambient pieces. In total about 16 minutes of droning. I was planning on making a 5 track EP or album based on the 5 points of the pentagram, but what the heck. They are good songs, so they are on this one. Maybe parts 3,4 and 5 will appear on future releases.
9- Phantom Skies
This one is a rework of the remix i did for Acylum. I took out their parts and added my own. After "Dirty Distorted Dancehall", "Android daggering" and "Shake it" this is another indus tune based on dancehall rhytmns.
10- Military Industrial Complex
A long (8 minute) hardtechno track based on the farewell speech of the US president and former general Eisenhower in which he warned for the military industrial complex, a conglomerate of military factories which corebusiness is weapons and who will lobby to keep wars going to keep on selling and making profit. These guys lobby heavily in the US government, so now you know why soldiers are send to fight everywhere. Not for democracy but for profit.

The new album will be available at bandcamp, and perhaps on itunes and suchlike. Given the fact that releasing CDs has become an even greater money sink then it used to be there will be no CD version of this one, apart from some Kunaki CDr thingies i will make for the band itself because we still like hardcopies ourselves. I would reconsider that if we got a really really good label offer, but we ourselves are not going to release hardcopies anymore since too few people are buying them to justify what we ourselves have to invest in them.
Made by TPROE at 9:38 PM

TPROE
The netherlands premier rhytmnic noise band. Started out in 2000. Already released a ton of albums and EP's though their own label New Darkness recordings and on US based Vendetta Music. On this blog we will post about stuff we like, stuff we don't like, stuff which keeps us busy and cats.